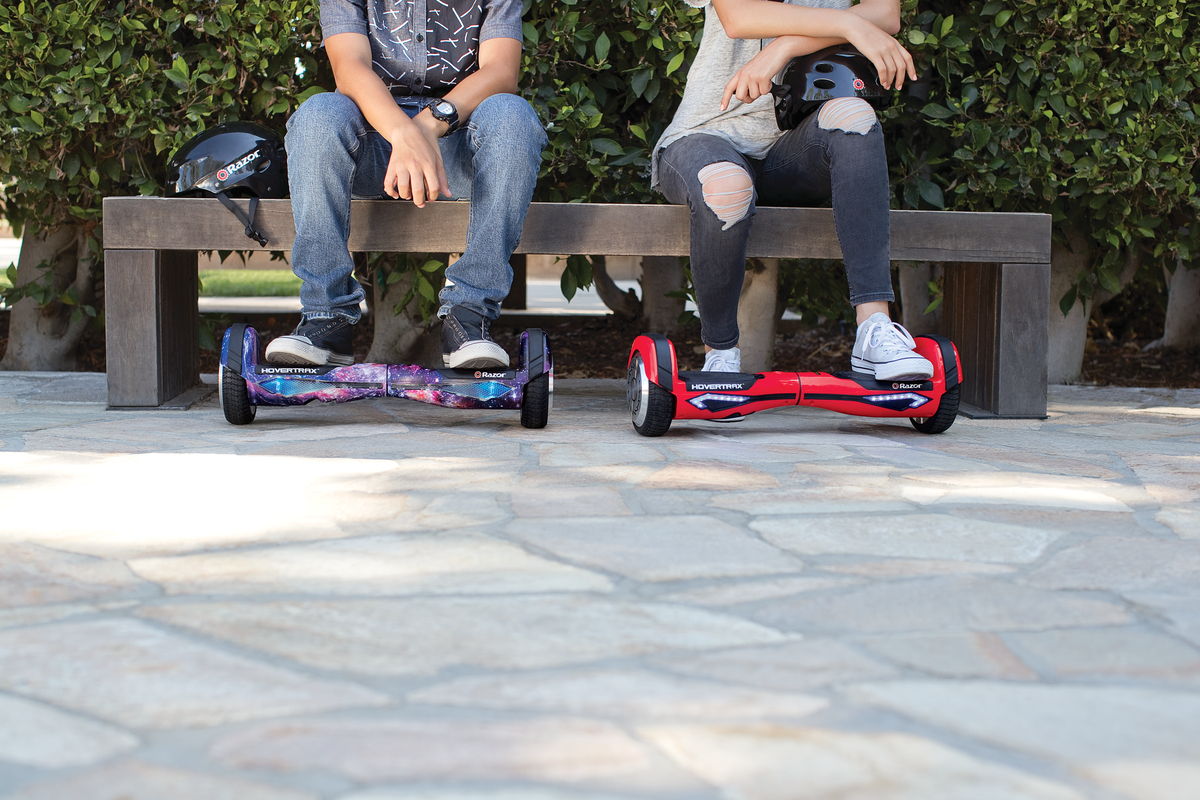 The Hovertrax 2.0 is a new step in the development of hoverboards from Razor. Considering that any novelty from the Americans powerfully moved forward the entire industry of electric transport, it is already becoming interesting. Let’s take a closer look at what is probably the world’s best self balancing scooter.

So far, the only thing that impresses – but how cool impresses! – is the range. Two hours on a single charge is great attainment for a hoverboard. But Razor definitely did not stop there, the devil is in the details. Let us take a closer look at the model.

And the first look, of course, on the “cover” – the design. Hovertrax 2.0 has an impressive and very modern look. Straight lines, rounded corners, pronounced relief of bumpers – it is the same futuristic minimalism, which now dominates in design. It seems to be quite neutral, but at the same time, it looks really interesting.

Very cool are the LED indicators on the front of the case! Razor managed to put on their Hovertrax full-fledged turn indicators, which instantly react to a shift of the center of gravity and illuminate the appropriate direction. This is the hilarious detail that turns a great design into an excellent one!

The polymer frame of Hovertrax can easily cope with minor impacts, not afraid of accidental collisions with obstacles – they are cushioned by bumpers. Platform pads gently cushion your feet and provide 100% reliable contact with your shoes – the material is absolutely non-slip. The surface is completely monolithic, there are no buttons under it, so you stand very confident.

That’s all about design and appearance, let’s go “under the hood”.

If we are going to evaluate the benefits of the Hovertrax 2.0, then the unique self-balancing system from Razor will come first. The fact that we are facing a hover scooter with a gyroscope (and not with buttons, as in the economy class) was clear from the beginning, but even in the premium class, it stands out among analogs.

What is an EverBalance System?

All in all, EverBalance is the most advanced self-balancing system in the world. If you’re still wondering which gyro scooter to choose, here’s a cool trump card from Razor: there are no analogs.

Razor is a manufacturer that has always strived to make electric transportation truly popular and widely available. A new step in the development of this concept is the support of two speed modes, implemented in the Hovertrax 2.0. The main one assumes a speed of up to 13 km/h and is designed for experienced riders, while the “learning mode” sets a sharp limit on acceleration and helps you get the hang of it.

In general, it is very easy to get on the Hovertrax: the hoverboard reacts sensitively to every action of the rider, it accelerates and brakes very smoothly. If you are just learning, it is definitely better to buy Hovertrax than any other mini-segway.

The Razor Hovertrax 2.0 is the first certified, has the highest quality, and is the safest hoverboard in the world. The Americans have even achieved the fact that the Hovertrax can be freely carried on airplanes: it is the only mini segway that has such a permit! This is made possible by LG’s quick-release battery.

To Sum Up – Our Impressions

Our impression – the Hovertrax 2.0 is awesome! It goes very smoothly and gently while accelerating really fast. The Razor’s hoverboard responds to each, even the weakest, deviation of the body – you feel one with this two-wheeled platform!

True, keep in mind that the wheels on Hovertrax 2.0 are 6.5 inches. That’s quality rubber on aluminum rims, but the model is still demanding on the pavement. The Hovertrax feels best indoors and on good asphalt, when riding around town, be careful and choose the road carefully.

And most importantly, remember: Razor Hovertrax 2.0 has no analogs and will not ever have! This is an original American development, the heart of which was branded microcomputer Razor. No other company in the world has the power and technology to copy Hovertrax: everything is patented by Razor.